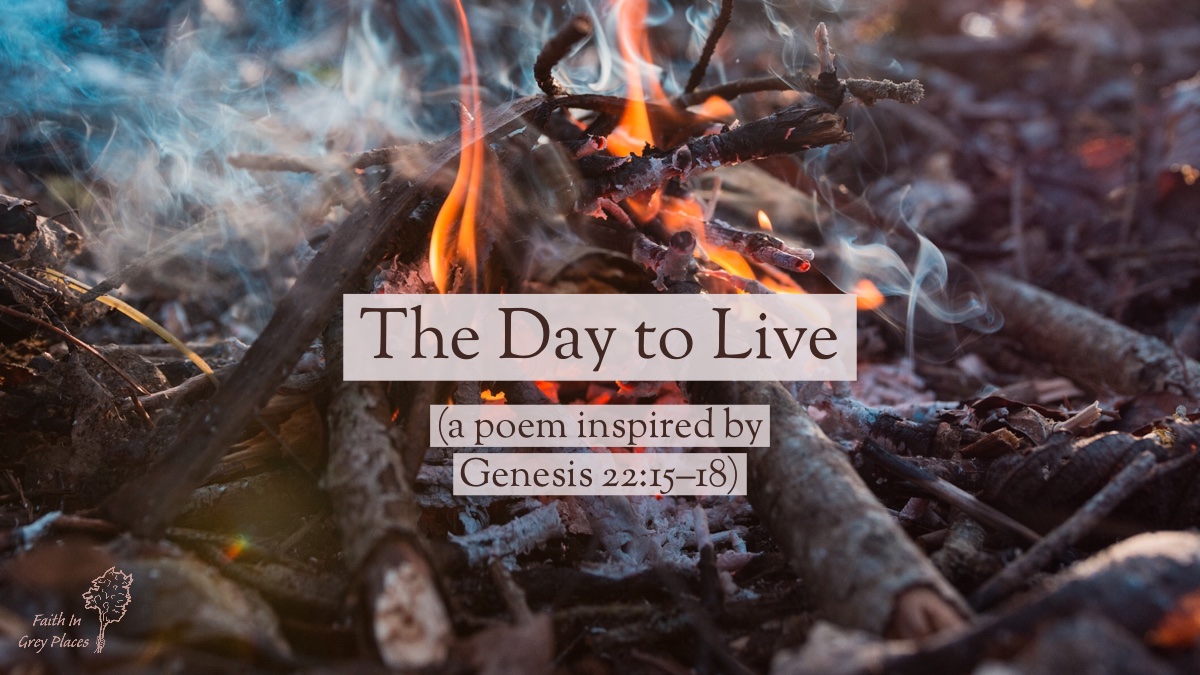 Continuing the series of poems drawing on the scripture readings in a Festival of Nine Lessons and Carols.

Genesis 22 is all about the time that God tested Abraham, who prepared to sacrifice Isaac — even though Isaac was the only son he had by that time. I wrote more about that story (and the theological debates that surround it) in my letter to Abraham as part of the previous series.

As you may have gathered from last week’s email, the readings for this type of carol service are short. On the one hand that means we have to fill in the wider context for ourselves, but on the other, it means we’re more focussed on the verses selected.

This passage remains a very challenging one. In verses 15–18, God’s angel calls to Abraham a second time (the first time was to tell him not to harm Isaac). The angel commends Abraham and describes all the blessings that his children will inherit.

As I considered what to write, I found I didn’t want to give these blessings an unqualified embrace. I was still wrestling with the violent context of this story; also, the blessings are addressed to Abraham but Isaac is the one who nearly died.

However, I did notice a couple of new things this time. In the typical story arc of a person who sacrifices other people, they do it in the expectation that they will gain something themselves. That wasn’t the case with Abraham. Also, in the typical arc, the people whose wellbeing is sacrificed are often unimportant to the protagonist (albeit not always). But again, that didn’t happen with Abraham. He didn’t try to throw someone else in the way of harm in order to protect Isaac.

It also struck me that if Isaac had been sacrificed in order to secure a divine blessing, Isaac wouldn’t have benefitted. Instead, Isaac reaps the reward of Abraham’s obedience.

I still find the story a difficult one to wrestle with, but it was helpful to see the differences from other stories that seem to be thematically similar.

For this poem, I chose to focus on Isaac’s perspective.

The Day to Live

Here is the wood and the fire,
And there is the ram God provided.

The smoke rises,
My father sits,
His knife discarded
Amidst the ends of rope
He was so quick to cut away from me.

His breath mists upon the air
But his eyes shimmer in the heat.
He doesn’t know what to say to me.

Had he hoped that I would see God?
That his angel would answer my questions
And restore my spirit?

Does he hope even now
That God will break
The silence that lingers between us?

Suddenly, I see all the desires of his heart
His longing for my birth,
His dread at this day.
He had not offered me up
To gain anything.

I watch the wood and the fire
And slip my hand into his.
If my death will not separate us this day,
Then neither shall my life.

Slowly, his shoulders ease
And I rest my head.
Then I shut my eyes
And hear the angel’s voice a second time.

It’s curious to think of Isaac reconciling with Abraham. There’s a similar them in the series of Passion and Easter poems. I had set out to write a poem about Maundy Thursday but instead found myself imagining a scene on Holy Saturday, where Jesus and the Father sit in silence together. That poem is on the blog.

Photo by Josh Garza on Unsplash